Ready for takeoff!
Woodward energy on the move exhibits

The Client: Located in Fort Collins, Colorado, the Woodward company, dedicated to improving and evolving products that control energy for aerospace and industrial applications, desired a space to house an exhibit to commemorate its 150th anniversary. They chose to build educational exhibits within two hands-on discovery museums: Fort Collins Museum of Discovery in Fort Collins, CO, and the Discovery Center Museum in Rockford, IL.

In 2020, Exhibit Concepts and History Factory partnered together to design, fabricate and install interactive exhibits to highlight Woodward’s mission and areas of expertise, with Exhibit Concepts focused on the fabrication and installation project responsibilities.

The project kicked off in February of 2020 with design, but due to COVID-19, the fabrication and installation were delayed several months. To prepare for a speedy installation, Exhibit Concepts continued to work through the design and detail drawings to ensure a smooth production timeline until all facilities were reopened. Once our talented master craftsmen were back on the shop floor, fabrication happened at rapid pace due to the pre-planning. The six interactives we built were themed to show how energy works according to the aspects of air, land, and water.

For the “Air” exhibit wall, we produced two interactives. The first was a cutaway of a jet engine that was backlit with animated LED lighting to show the stages of the engine.

The second, and more complex interactive, was a “Ready for Take-Off” video game that was used to teach the children how to use the jet engines efficiently to conserve fuel resources while flying an airplane. This interactive utilized the “Thrust Reverser Actuation System (TRAS)”, a product produced by Woodward for Airbus airplanes that helps to slow down the aircraft after touch-down and reduce the wear on the brakes

Visitors using the land wall will be chanting this classic Little Engine that Could line to themselves as they crank two handwheels to get their train to the top of the hill. This interactive was designed to teach the user how it takes more energy to move a heavy train along the tracks and up a hill, than is used for a lighter train, by turning two handwheels at once to make the trains move up the hill. The lighter train will use half of the effort that the heavy train uses and will reach the top first.

The two interactives to represent water, are intended to educate about generators and hydroelectric power plants.

The first was used to teach the user about the generators within a hydroelectric plant. The user turns a handwheel to create energy. When the handwheel is turned a light bar will light up starting red, then progressing to yellow, and finally to green. When the entire light bar is green the user has successfully generated the necessary amount of electricity. 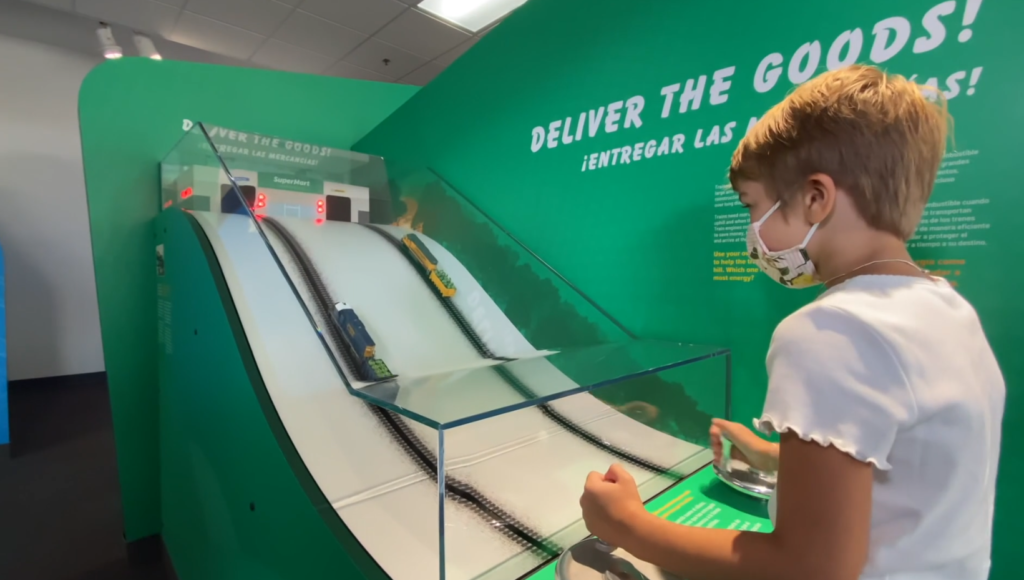 Although COVID-19 brought unexpected delays and challenges to the project timeline, our “heavy train” made it up the hill and into the station as the exhibits are now fabricated and installed at both locations. It is always fulfilling for us at Exhibit Concepts to achieve the client’s vision, and to witness the joy children (and adults alike!) experience through these educational, hands-on engagements